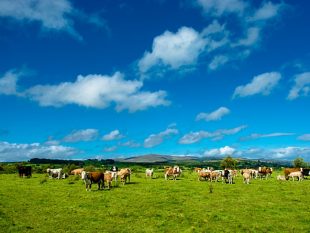 It already feels like a long time since the scorching summer of 2019. Theresa May had just resigned; the Amazon was burning, and England had won their first Cricket World Cup. Extinction Rebellion were on the streets and David Attenborough had hit centre stage at Glastonbury.

This was the backdrop as Blue Marble explored how the public feel and behave around what ends up on their plate and how it gets there, on behalf of the Agriculture and Horticulture Development Board (AHDB).

Back then, the public’s greatest concerns – from a prompted list of 20 issues – were the state of the NHS, pollution from plastic waste, global warming, and Brexit. Food-related issues like the treatment of farm animals and food waste were secondary, slightly ahead of personal finances and the economy.

However, we found that consumers were increasingly mindful of the food they consume. Many had cut back on animal products, particularly red meat, whilst some had become completely vegan. We came across meat reducers referring to themselves as ‘flexitarian’ – though also a handful of self-identifying ‘vegans’ or ‘vegetarians’ who were eating red meat at least occasionally.

We can no longer assume these traditional labels (vegan, vegetarian) are good indicators of motivation or behaviour: where veganism historically placed animal welfare at its core, environmental arguments have entered the conversation and consumers are taking a more nuanced approach to meat and dairy reduction, harder to pin down to a single label.

Despite this, consumers were – and still are – trying to eat what was right for their pockets and their health as much as (if not more than, for most) for animals and the planet. But navigating the aisles is difficult with all this information in mind. To make the right choice, many revert to convenience, use their own arbitrary criteria, or rely on brands for shortcuts.

When we explored the tools, consumers use to navigate the shelves, we heard a lot of praise for the traffic light system – valued for its consistency across brands and supermarkets, helping consumers make healthier choices.

Consumers told us that they wanted a similarly standardised approach for the environmental and ethical standards of their food. We tested a few ideas and found around half of the public are positive about labelling farming method (e.g. indoor) and origin, or the named farm. There is more limited enthusiasm for measures allowing consumers to get closer to the producers such as open farm events; QR codes on packs which allow tracing of the full food journey; or interactive webinars with farmers.

Delving deeper we found that these approaches, designed to show transparency, while providing reassurance, would not fully address consumer needs and many admit to not being able to interpret them in a busy supermarket. Some of these ideas are already successfully operating, others are being gradually launched, but they lack the simplicity, peace of mind and neutrality that star-based or traffic light systems offer consumers to help them make the right choice.

Fast forward to summer 2020, after an unprecedented period of lockdown. Most of us have re-prioritised many aspects of everyday life, including how and what we eat, and where and when we shop – at least in the short-term, but possibly in the long-term too. While the need for transparency and simplified labelling is continuous, how have consumer needs and expectations more broadly changed since this time last year?

We found that plastic packaging (and avoidance of it) was a big concern amongst the public. Climate change was very high on the agenda, too. Now, plastic bags have returned to supermarket shops and new hygiene measures are producing additional landfill. Have we fallen behind our ideals from last year? Or do we need to establish better ‘sustainable hygiene’ for long-term protection?

Our 2019 research showed that, on food chain issues, trust in supermarkets was relatively low (and a long way behind trust in farmers). But our recent polling in May 2020 suggests supermarkets have gained huge levels of public approval through their handling of the crisis: could this present new opportunities for influencing consumers’ behaviour?

As if they didn’t already have enough challenges to deal with, supermarkets and brands must navigate this new consumer mindset with care as they seek to maintain trust after the crisis. With new trade deals potentially presenting additional challenges for preserving consumers’ confidence in what they are eating (chlorinated chicken has been the stand-out objection to a US trade deal, and other issues are likely to arise), continued research into consumers’ attitudes and behaviours will be more important than ever.