Through the keyhole: supermarket sweat 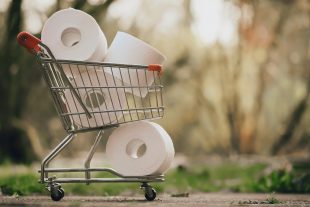 “I dread going.” In a lockdown, shopping is a rare chance to leave the home. For some of us, it also feels like the most dangerous day of the week.

For the last four weeks, we’ve been running a small qualitative study to explore the impact of lockdown on everyday lives. We’ve heard about its effect on almost every aspect of day-to-day life. Perhaps none has changed as profoundly as shopping.

One of the most striking themes, again, is the uneven impact of the lockdown – while the experience of buying groceries has changed for everyone, it’s also disproportionately challenging for specific groups in society: such as those with pre-existing health conditions, on lower incomes, in urban areas or with certain mental health problems.

The macro-level data shows how purchasing behaviours have changed in the last month – and, consistent with this, many of our participants told us how they have switched from shopping ‘little and often’ to an occasional ‘big shop’ (somewhere between twice a week and once a fortnight).

But some of us are not able to make this change very easily. City dwellers without a car (disproportionately the poorer members of society, even if there are also plenty of affluent urbanites who fall into this category) are limited by what they can physically carry back from their local store. As a result, they need to go to the supermarket more often, or adjust what they buy: “I do a small shop because I have to carry everything myself. Therefore, I avoid heavy items.” “I shop about 3 times a week because I don’t own a car and carry 2 tote bags only.”

The shopping experience – and, for people who are particularly anxious about catching the virus, the terror – starts outside the store. Our participants told us about trying to time their visits to avoid the busiest periods but, regardless, queuing has become the norm. For most of us, this is frustrating, but we’re used to it now. For those with pre-existing health conditions or anxiety, however, time in the queue heightens stress: “There’s only so much luck you can have when you go out.” We’ve heard how queuing – famously a British strength – has prompted heated arguments, driven by concerns about poor social distancing rather than by people skipping the line.

Shopping is also uniting us, however. Participants have told us how the prevailing “2012 spirit” of solidarity extends to the aisles: some of our participants are shopping for others, while others are having their essentials bought for them. While this has led to the odd hiccough (“I went shopping for three elderly neighbours last night and forgot things for two of them so had to go back!”­), it is bringing us closer to others, for better or worse: “They asked me to buy a large bottle of whiskey for them last night – for the second time in a week!”

Once we get inside, our priorities have changed. A journey through the aisles used to be a case of picking what we wanted; now it’s much more about what we can get. Our participants have reported that the early stockpiling seems on the wane, if not totally a thing of the past (as one person said this week, “I’m frustrated by the locusts stripping the shelves”). But we’ve changed what we’re looking for, placing a greater emphasis on longer-life products (with flour, pasta and tinned tomatoes still elusive for many) because this means we need to go shopping less frequently: “I still cannot get flour or liquid soap […] but have been fine with everything else. [I’m] not desperate enough to risk going around more shops / supermarkets.”

The in-store experience has changed, too. After the early stockpiling madness, we generally think our fellow shoppers have calmed down: “I went weeks without being able to buy fresh vegetables and fruit [but] it feels much improved. Today […] all the shelves were stocked well and there was a calm atmosphere.” But gripes still surface: we worry that others aren’t obeying social distancing instructions and see people diving in front of us to grab an item off a shelf. “[I’m] amazed at the supposedly educated people who can’t work out what 2 metres is.”

Our participants have generally been impressed by the supermarkets’ response to the crisis. This extends across the sector, with little differentiation between companies: all are thought to have adapted quickly, intervened decisively and fairly, and prioritised the health of their workers and customers. If prices have gone up, this is largely considered acceptable in the current climate.

Will shopping for essentials ever be the same again? Most of our participants think that many of the changes introduced by supermarkets over the last few weeks – from controlled queues to one-way systems and disinfected trollies – are here for a long time yet. Whether their positivity towards these companies is as durable remains to be seen.